The static can be:

Watch this video on our YouTube channel for better understanding, else, keep reading.

Static variable in Java is variable which belongs to the class and not to object. It is initialized only once at the start of the execution.

The above program has a class Candidate in which we use static variable Institute. This variable is common to all candidate so we make it static using static keyword. The candidate information will be displayed with different roll no and names but same institute. The advantage to making institute variable static is that it saves memory as it loads once in a class area at class loading time:

A static method can be invoked without the need for creating an instance of a class. 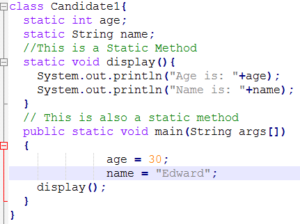 As you can see in the above example there is no need to create an object of class Candidate it is directly called because I had to make method display as static using static keyword.

Is used to initialize the static data member. It is automatically called when your class loads, i.e. when you run your program.

In this example of static block, static block will be going to execute first after loading class.