Java is pure object oriented or not? if not why?

Pure Object Oriented Language is the language that utterly supports everything inside a program as object. Any language must fulfil these seven features to be pure OOPS –

Java supports property 1, 2, 3, 4 and 7 points mentioned above but fails to support property 5 and 6. Java language is not a Pure Object Oriented Language as it contains these properties which can be explained with following three reasons:

1) It does not support Multiple inheritance.

Example- diamond problem that occurs while using multiple i 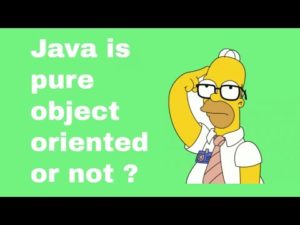 2) It allows the use of primitive data types which are not objects.

Because all Java data structures are not objects. A few of them are primitive values that can be stored in object variables but are not objects themselves. Primitive types should be well-known from Java interfaces or classes, which are types of object only. Hence, the type of a variable can be a primitive type or an object type, which can be an interface or a class.

3) It allows static methods to call without creating the instance.

Java provides a class, which is user-created datatype.

Therefore, if I have a method that is linked with the class more than an instance of the class, it is generally declared static.

I Hope this article will be helpful for you. This question is important and mostly asked in interview questions.